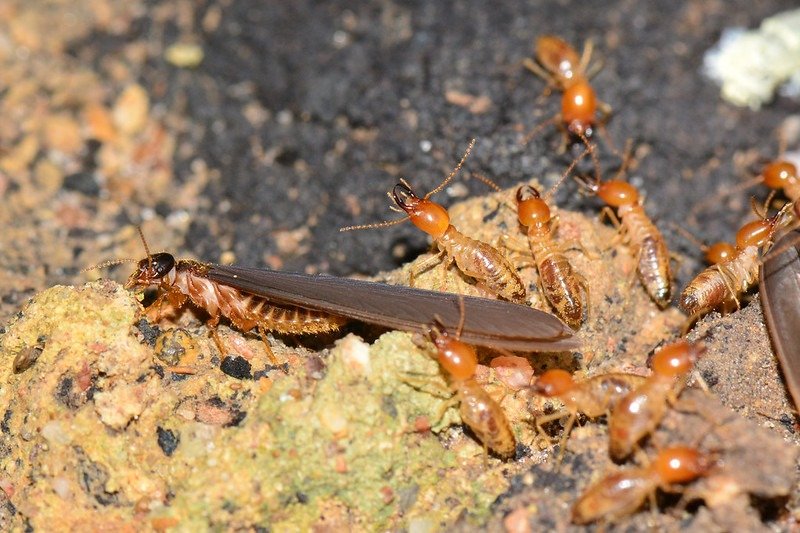 You're here: Home Home Improvement Termites vs. Ants: How to Differentiate Between Them

Termites vs. Ants: How to Differentiate Between Them

Termites and ants are both species that swam during their mating season. The two species are attracted to moist woods and tend to cause significant damage to them.

Their tendency to damage wood, having four wings and three segmented parts, has made both species to be mistaken for each other. However, they have more differences than similarities.

Here we will focus on carpenter ants, as they are more easily mistaken for termites because of their shared love of damaged wood, and how to distinguish between them.

A significant difference between the two is the waist. While the termite has a ‘broad’ waist, the ant has a ‘slim’ waist in proportion to its body. However, both have three segmented bodies, so look out for the waist if you see what you think might be either.

Termites and ants have different wing structures, which you can use to distinguish them from each other. A winged termite has front and hind wings, which are longer than its whole body.

The front and back wings of the termite have the same length. However, ants have shorter wings, with the hind wings being shorter than the front wings.

Color is another critical clue to distinguishing a termite from an ant. They both have different colors, as ants are usually deep black, while some ant species are deep red.

The ant’s color is deep and cannot be seen through. Meanwhile, the termite’s color is based on the hierarchy in their colony, and they are usually dark brown to a pale white or creamy tan, and their color is translucent.

Both termites and ants have different food preferences. While the Termite eats the wood to get the cellulose, ants burrow into the woods to make a nest with several passages.

Ants eat syrup, honeydew, meats, and foods rich in proteins and sugar. The ants, however, do not eat wood. They leave shavings behind from the wood they burrowed into. Overall it is best to call an exterminator to control the situation.

A termite goes through three phases in its life cycle, the egg, nymph, and adult. Meanwhile, the ant goes through four lifecycles, the egg, larva, and pupa, to the adult. Their longevity also varies from each other. While the termites’ soldiers live about 1-2 years, the queen can survive for decades.

Ants soldiers, on the other hand, have a shorter life span. The male ant exists for only a few days and dies after mating with the females. While the worker ants live from several weeks to a few months, and the queen lives for several years.

Both termites and ants are pests to human beings. Termites destroy wood structures, peel paint, and damage tiles, while ants also cause significant damage to wood. Their major damage is in the food supplies they forage in, looking for food.

With the characteristics of each of them stated above, you should be able to identify the type of pest disturbing your home. For professional help, call an exterminator to eliminate the pests for you.