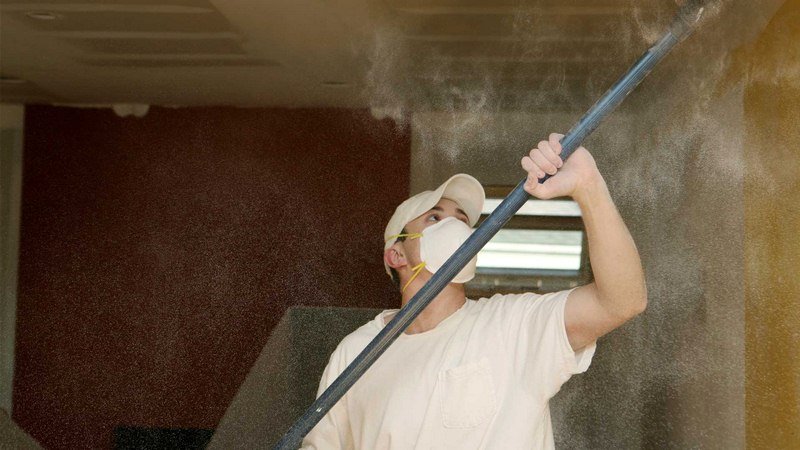 You're here: Home Home Improvement Why It Is Imperative to Know About the Removing of Popcorn Ceiling Professionally

In the time period between the 1930’s to the 1990’s, a unique and eccentric type of ceiling was popular, and was a part of the lobby and rooms of almost every 3rd house. As a result of a law passed by the Government of the United States of America in 1978, removal of these kinds of ceilings became mandatory.

You can do this job on your own, but there are some few reasons due to which you should only go for a professional popcorn ceiling removal.

What are Popcorn Ceilings?

Popcorn ceiling is also known as cottage cheese, acoustic or stucco ceilings. They all were in great demand and had endless popularity among many Americans during 1930-1990s. You will find these ceilings in Residential homes designed during this period. They are characterized by their rough-textured, a unique look and feel.

They are patterned with a sponge or sprayed on with a hopper gun. Usually, these ceilings were seen in the bedrooms, entrance hallways, and basements of the houses. The ceilings were textured with a material like a stucco or Styrofoam that made them appear bumpy this is why they were named as popcorn ceiling.

These ceilings were a cost-effective, and time efficient way for people around. But later, in the late 70s, people had to discontinue using them. The reason is that the mixtures used in these ceilings had a pollutant Asbestos in them that was banned under the Clean Air Act of 1970, passed by the Government of the United States of America.

Asbestos Ban and Its Relation to This Ceiling

The use of Asbestos is completely banned in the United States. Asbestos was considered an ideal material for construction purposes in the late 19th century and early 20th century. They were known as an excellent fire resistant, high electrical resistant, and was, of course, cheap type product. The problems which they gave were discovered much later.

Asbestos becomes harmful when the fibres present inside it become airborne and were inhaled. The large size of these fibres does not allow the lungs to exhale it out. The fibres were sharp too, making them more harmful, as they may penetrate or hurt the internal tissues.

The major problems caused by Asbestos are as follows:

This is a lung disease. In this, the lungs’ tissues get scarred by Asbestos fibres. This disease may even cause the lungs to stop functioning. This for the very first time was found in textile workers. It takes 10 to 20 years for a person to get recovered from this.

Asbestos is a carcinogenic substance. Asbestos can cause lung cancer, the latency period for which is 15 to 30 years. It can also cause cancer in the Kidney and larynx.

This is also a type of cancer caused by Asbestos. It is caused in the mesothelial lining present in the lungs. Mesothelial cancer has no relation to smoking. The only known reason for this cancer is the exposure of the lungs to Asbestos or similar substances. The latency period is 20 to 50 years.

Asbestos has been categorized as “controlled waste” under the Annexure I of the Basel Convention. In simpler words, its usage, import, and export are prohibited; however, it is still being imported and exported. It is not just banned in America but also in Brazil, Italy, Australia, India, France, South Africa, New Zealand, Canada, Japan and Hong Kong.

If your house was constructed between the 1930s and 1990s, and you have a popcorn ceiling which has not been examined yet for Asbestos, make sure that you get it tested soon. If you are planning to remove the ceiling, do not choose to do it yourself as it can be really harmful. Contact a professional for that. The Inspection procedure may cost you a little, but it is important.

There are several methods of removing the cottage cheese mixture and changing of this ceiling. But before doing anything on that, get your ceiling tested for Asbestos. Contact a local health department for the purpose. Some of the methods are as follows:

The professional Scrape a small area of the ceiling, with a dry scraper first, then dampen it a little bit. In some cases, the texture comes out as a dry one, but a wet one is generally the best.

Step 2 – Keep the Furniture Out

They keep all the furniture out of the room in which they are working in. For avoiding any risks, you can cover it up with something.

Cover the floor, the walls and the electrical boxes and anything else necessary with plastic sheets. Take out the light bulbs and tube lights. Stuff in some newspaper inside the bulb sockets

These experts use a garden sprayer to spray some water on the ceiling to make it moist. Let your ceiling soak up some water. Leave it for 15 to 20 minutes. Give it some mist. They don’t make it so wet that water starts dropping down from the ceiling. After that, they spray it one more time and leave it for another 15 Minutes.

Then, they start with the final scraping. They Work on small areas, like a 5 x 5 feet area. If they will work on large portions at one time, it will dry up before they can scrape it off.

“Kevin Roy” is a passionate content writer at CEILING STUCCO REMOVAL which is a well-established company that takes great pride in quality workmanship. We have highly qualified tradesmen who specialize in this department. We take the time to do it right the first time.