8 Signs of Water Leaks in Homes

Are you suspecting a water leak? These can be a nightmare for homeowners, creating an array of minor and severe problems, such as smelly rooms and structural damage.

The sneaky character of water makes leaking problems almost impossible to detect unless homeowners pay attention to the signs. 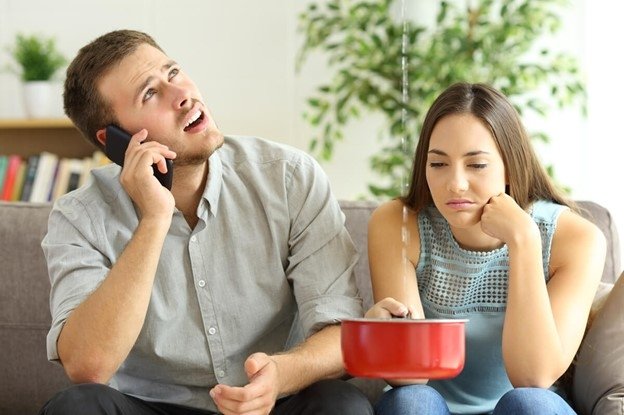 8 Signs of Water Leaks in Homes

Have a detailed look at each of these signs.

A common sign of water leaks in households is the appearance of dark spots and ceiling discoloration.

Such stains usually indicate a roof leak, but they sometimes develop in homes with an upstairs bathroom.

If the discoloration occurs just below the bathroom, the water source most likely originates from this room.

In addition, water leaks might appear inside walls, which makes them hard to detect. In such cases, discoloration and blistered paint are the easiest way to detect them.

Ceiling leaks show no signs until leaking becomes serious. Therefore, the moment you notice stains means that the problem should be addressed momentarily. Visit this site to check out how to get rid of brown ceiling stains.

Homeowners who see an increase in their water bills should suspect a leak somewhere in the house.

Even in the event of a minor leaking problem, thousands of gallons are wasted on an annual basis.

The most effective way of checking the presence of a leak is by inspecting your water usage when nobody is in the house. 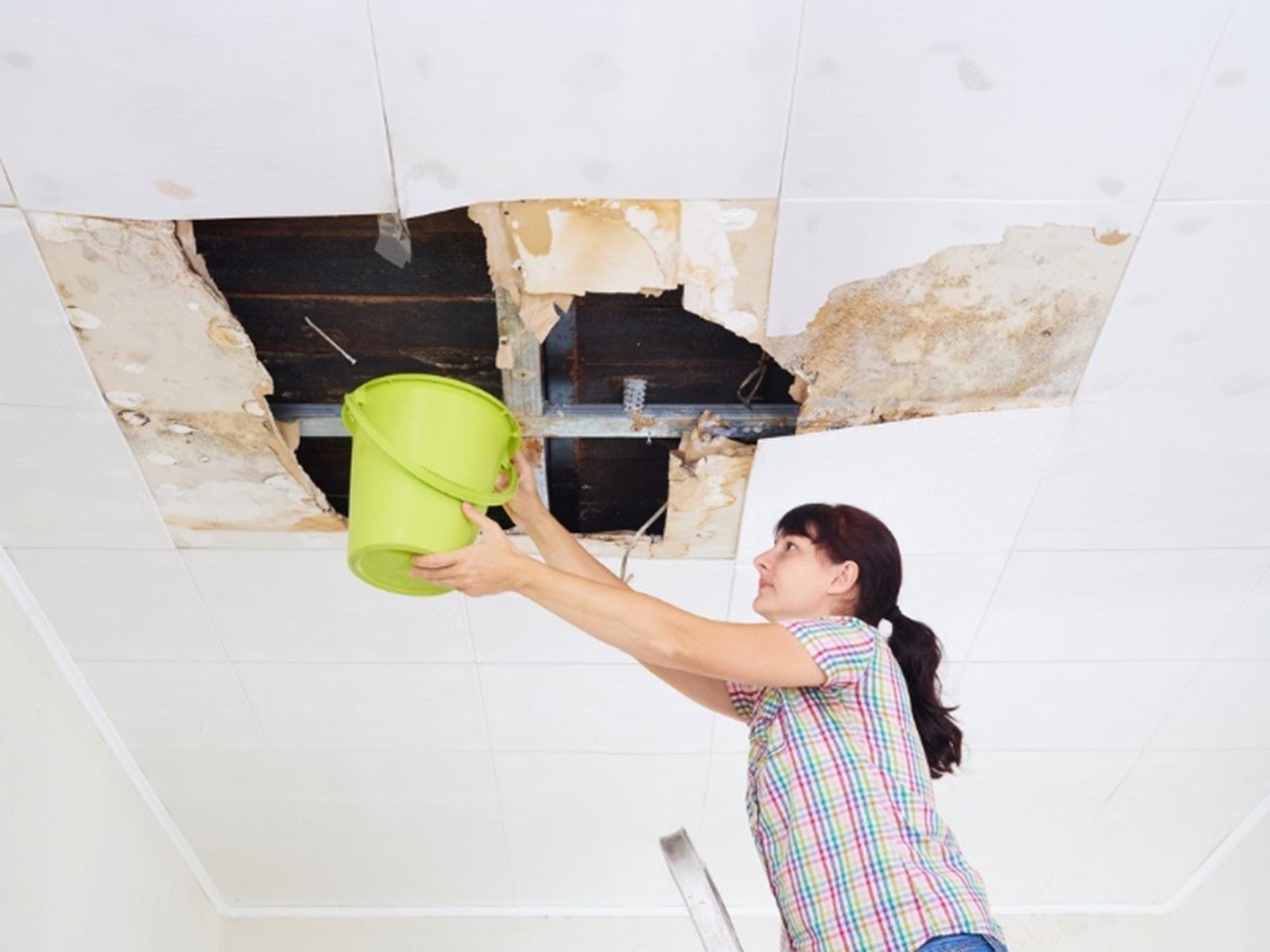 Make sure to check the water meter numbers prior to leaving your home and once you return.

If you notice even a slight change in the numbers, there is undoubtedly a leaking issue in the house.

For instance, leaky toilets are usually responsible for the sudden increase in utility bills. The solution is usually as simple as changing the existing flapper or the flush ball with a new one.

The longer water leaks are left untreated in households, the greater the risk of mildew and mold infestation.

These unsightly fungi grow whenever moisture is present for longer periods. For example, mold might grow due to condensation coming from uninsulated pipes, leaky pipes, or a leaking washing machine hose.

Whatever the cause, mold is responsible for inducing upper respiratory problems in family members.

It worsens the symptoms of asthma and allergies in people exposed to its presence every single day. Therefore, mold infestation is best handled by specialists.

Ignoring the smell is not an option, as the consequences of mold growth will only get worse.

A Drop in Water Pressure

Low water pressure is another sign of having a leak in your home. Such a drop in pressure is usually triggered by faulty valves, sediment accumulation in pipes, and of course, leaks.

This type of pressure change can be occasional or regular, indicating a plumbing issue. 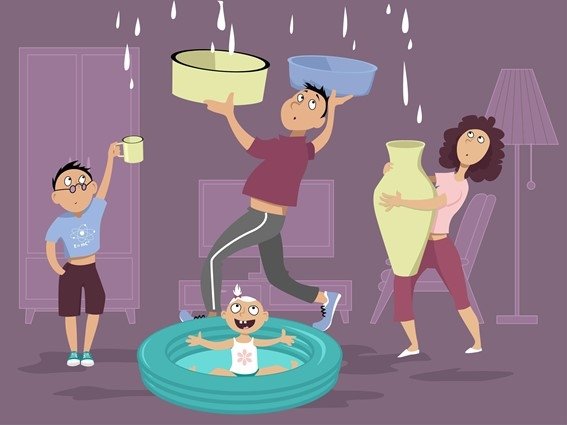 Apart from experiencing low water pressure when using the shower or faucets, some appliances might indicate a pressure problem as well.

For example, you should pay attention to the time it takes for your washing machine and dishwasher to fill. If it takes longer than usual, you might be dealing with reduced water pressure.

If you happen to suspect a water leak, make sure to press down the areas suspected of damage to check for softness and flexibility.

Leaks have the power to make walls and ceilings flexible and saggy, which in turn has a negative effect on the structural integrity of houses. 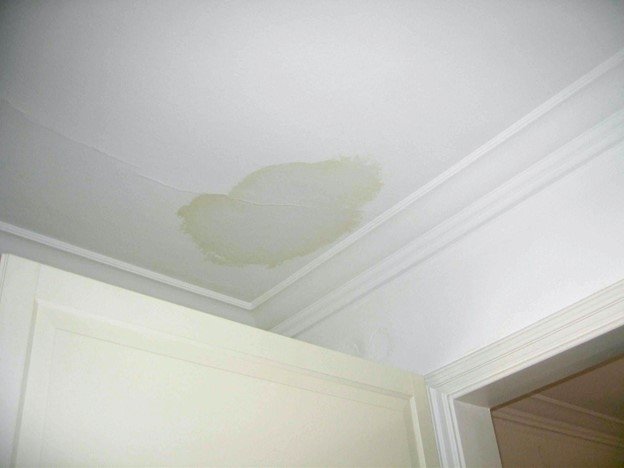 Most construction materials, such as wood, are hygroscopic, meaning they become soft because of water absorption.

Soft areas are also typical in bathrooms where tiling becomes spongy after the loss of adhesive.

Also, some of the worst symptoms of a severe leak include a termite infestation. These destructive insects are capable of causing structural damage in only a few years.

Another home feature to pay attention to when suspecting a leak is flooring. The ceiling isn’t the only part of homes affected by stains, as floors might stain as well.

If the floor in your bathroom is stained or warped, there might be a faulty pipe underneath it, which is to blame for leaking.

As far as the kitchen is concerned, tiles gradually become loose, and the caulking is likely to start peeling and cracking.

Regarding carpeted areas, these usually start smelling musty and become damp because of a leak under the floor.

Once wallpapers and paint start blistering, it means there is most probably water damage somewhere in the wall.

Nevertheless, the moment you see paint showing such signs, it means the damage has been present there for a while.

Wood and drywall are most susceptible to moisture, which is why the structure underneath walls becomes deteriorated.

Weird Noises Coming from the Plumbing

Another sign to watch out for is the strange noise originating from the plumbing system.

If your system works optimally, there should be no noise coming from it. There are multiple reasons for the rattling sounds produced by the plumbing system.

For instance, rattling noises are usually an indicator of loose-fitting caused by a leak, which does deterioration inside the pipe walls.

Also, you should be aware of any hissing originating from the pipes. The sooner you get the problem resolved, the less serious the damage.

Ignoring these signs might end up in costly household damage.

Even minor symptoms should be taken seriously and checked out on time before it’s too late. Call a professional to assist you in the resolution!