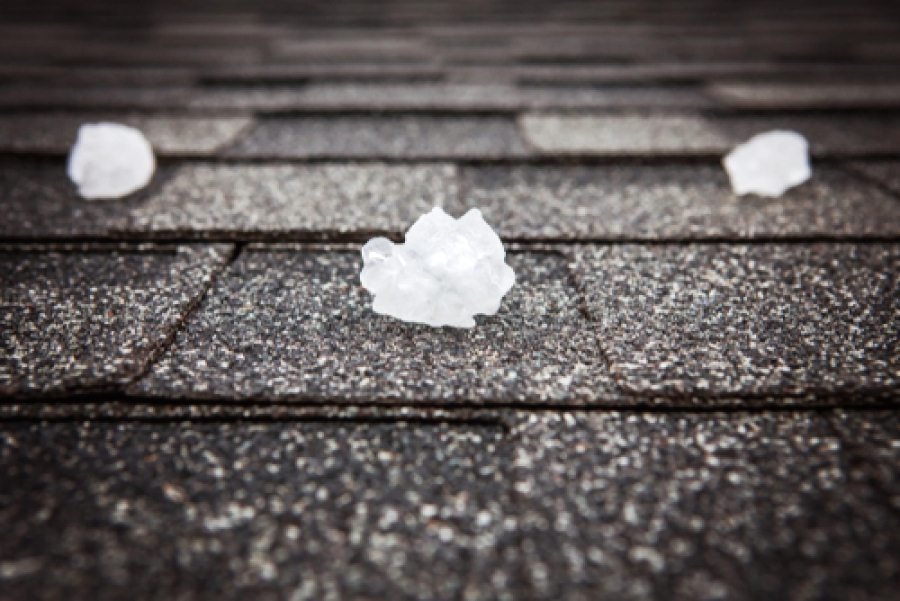 You're here: Home Exterior What To Do When You Find Hail Damage to Your Roof?

What To Do When You Find Hail Damage to Your Roof?

Other than large natural disasters like hurricanes and tornadoes, there are few weather events that cause more damage to your home and property than summertime hail storms.

If you’ve ever experienced one, you certainly know this to be a fact.

They’re more common in some parts of the United States than others, but a hail storm can occur regardless of where you live in the country.

And when one does threaten your area, you’re going to want to be prepared, both before and after the storm.

Tile roofs tend to do better than shingle roofs when it comes to bad weather, but there have been instances of even tile roofs shattering when golf size hail hits.

If you fear a hail storm is coming, you’ll want to protect your family first by making sure that everyone remains inside the home until the storm passes.

It’s also a good idea to either put your car in the garage or, if you don’t have one, to another area where it can be kept under cover.

Consider asking your neighbors if they have extra room in their garage, or even leaving it in a parking structure until the storm has passed.

But once the storm has come and gone, this is when you’ll want to turn your attention to assessing any damage to your property, making sure that you document as much as you can for the insurance company.

Only once you’ve taken plenty of photos and/or videos should you move onto the next step of the process.

After a hail storm, you’ll definitely want to get to work inspecting your roof. While there could be damage to other parts of your home and property, the roof is certainly the place where significant damage is most likely.

You can do this inspection yourself, but it’s probably better to call a contractor or a licensed roofing inspector out to do it for you.

He’ll know exactly what to look for and where to look for it. The significance of the damage will vary depending on many elements, including the slope of your roof, its age, the velocity of the hail and many other factors.

What Type of Damage is There?

The two main categories in this assessment are functional and cosmetic, the former obviously being more urgent and time-sensitive than the latter.

If you have functional damage to your roof, this affects the overall integrity of the roof and shingles and is something that needs to be addressed in a timely manner says Joel Kite, a licensed roofing contractor, and owner of Independence Roofing.

The last thing you want is to go through another significant weather event with a roof that isn’t structurally sound. So, address this type of damage as soon as possible.

Cosmetic damages, on the other hand, are ones that are not particularly nice to look at, but that doesn’t affect the functionality of your roof. These are not as time-sensitive as structural damages.

If you do it yourself, the insurance company could attempt to deny your claim. So it’s in your best interest to have a licensed contractor and/or inspector go over any potential damage to your roof.

Okay, this is obviously a very important part of the process.

It’s bad enough that your roof was damaged in a hail storm, you certainly don’t want to compound these troubles by filing a claim that will ultimately be denied by your insurance company.

As mentioned above, it’s always a good idea to document all damage that you find. Take good notes, snap a lot of photographs and even record a video of the damaged areas.

It’s also a good idea to then cover the damaged area with a tarp or other waterproof material, so you can show the insurance company that you’re protecting the roof in order to prevent any further damage and cost.

You hopefully also have older photographs of your home, so you can prove to the insurance company that the damage wasn’t already there prior to the storm.

It’s always a good idea to have photos of both the inside and outside of your home for these reasons.

After the insurance company has responded positively to your claim, you’ll need to contact some area contractors to get estimates for repairing the damaged areas.

Not only will the estimated costs be established, but also a timeline for getting the repairs actually done. If you’re not able to live in the home during the repairs, you’re going to be particularly interested in both cost and timeline.

With any luck, the work can be done in a relatively short period of time and you’ll be back in your home in just a few days.