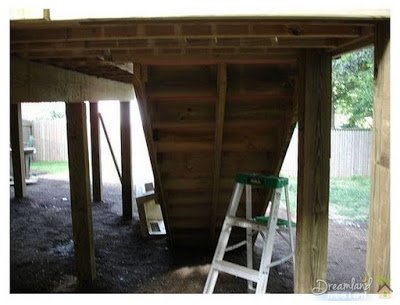 How to Make Stair Stringers — Deck stairways require a solid attachment to the deck framing for safety. We cover the ups and downs of stairway building for decks in this article with two methods for attaching the stringers to the deck frame. Learn more in this comprehensive article on deck stairway stringers.

How to Make Stair Stringers: Attaching Stairs to a Deck

Basic Installation on How to Make Stair Stringers

If you’ve never built a deck stairway, you might want familiarize yourself with stair building terminology.

The stringers may support considerable weight at certain times. There might be several people on the steps at once or you might carry something heavy up or down the stairs. The importance of a secure connection that insures safety is important.

Use a minimum of 1/4 inch screws or lag screws to attach the stringers to the header or ledger from underneath the deck frame. Use three screws that reach into the stringer a minimum of 1 1/2 to 2 inches. Always drill pilot holes for large screws, lag screws and lag bolts.

Use stringer hangers even when they are not required. Stringer hangers look like joist hangers, but the cup shaped piece of steel that supports the stringer is set at an angle. Short, heavy nails make most of the connections and put one nail into each hole provided.

Attach the stringer hangers to the stringers first using the short, heavy nails. The back of the hanger should be flush with the back edge of the stringer.

Related to “How to Make Stair Stringers“:

Drill evenly-spaced pilot holes through the header and into the center of the stringer edge that is against the header. Screw the stringer to the header using 1/4 inch galvanized or screws treated for the type of lumber you are using. Stainless steel screws are suitable for most types of lumber, including treated lumber.

From the front, finish nailing the stringer hangers to the header with nails. One nail in each hole provided is required.

Top Tread Below the Frame

Place the ledger board against the 2-by-6s and the lower edge of the header. Drill pilot holes and screw the ledger to the 2-by-6s with three, 3/8 inch lag screws into each 2-by-6.

Measure down from the top of the deck frame the height of one step rise and mark the ledger or header. Use a level to extend the line across the width of the stairway.

Attach the stringers to the ledger with the stringer hangers and with screws from behind as shown above in the “Level with Frame” section.

Related to “How to Make Stair Stringers“:

If you’re not using a concrete or stone pad, verify the position of one of the center stringers and drive a pressure treated, 2-foot long, 2-by-4 stake into the ground along side the stringer near the bottom. Screw the stringer to the stake with two 1/4 inch screws.

Check the center spacing of the stringers and install a tread on a step near the bottom to hold the stringers in the correct position.

Read more tips on deck building and attaching stair stringers to a deck.

Deck Building 101: You Can Do It Yourself

You can build a deck yourself. We’ve got tips, construction drawings, plans, cost estimating, and more in this series on building decks. You’ll find the information you need to turn your dream of outdoor living space into reality.