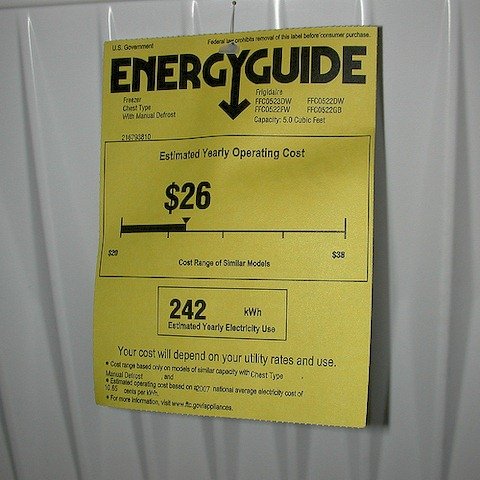 You're here: Home Home Improvement Energy Star: 4 Things to Know About the Label

Energy Star: 4 Things to Know About the Label

In 1992, the Environmental Protection Agency (EPA) and the Department of Energy (DOE) agreed to a revolutionary new standard for measuring energy efficiency. They invented the Energy Star system for displaying the efficiency of various appliances.

4 Things to Know About the Energy Star Label

As a homeowner, you should know how this system helps you. Here are four things to know about the Energy Star label.

The System Works for Everyone

Several members of the federal government worked together to build the Energy Star system. Over time, other countries such as Australia, Canada, and Japan joined them, along with the European Union. These governments saw advantages in rating appliances based on their energy efficiency.

Many countries bear the onus of supplying power to citizens, and the Energy Star system helps them to highlight which manufacturers are better at building power-saving devices. Homeowners love the system since it helps them save money on utility bills. Manufacturers view it as an opportunity to gain a competitive advantage over other businesses making the same products. Everyone has something to like about Energy Star.

The System Has Standards

Only certain appliances earn the Energy Star certification. The system has standards that a device must meet to qualify. Energy Star posts a list of criteria for these products. The primary qualification is that the appliance “must contribute significant energy savings nationwide.”

Energy Star doesn’t require any special technologies. Manufacturers can make qualifying appliances using readily available energy efficiency techniques. The EPA and DOE can measure a product’s energy consumption to see if it qualifies. Should it fall short of standards, the manufacturer has the right to improve the product and apply again. The government wants as many energy-efficient products as possible, and the Energy Star standards encourage this process.

The System Saves Everyone Money

As a consumer, you want to use as little energy as possible. You already dread the utility bill each month. You don’t want to waste money on vampire appliances, too. When you buy a product with the Energy Star label, you can have confidence that it will save you money on your utility bill.

The EPA estimates that Americans have saved $430 billion on energy since the program’s inception. Businesses and homeowners alike have benefited from the Energy Star label. It’s a symbol that buyers trust. To protect the system, the EPA also updates its standards occasionally to maintain the best possible energy practices. These updates sustain the utility bill savings over time.

The Label Shows Everything

The genius of the Energy Star label is its simplicity. The sight of it is an indication that the product is in the top 15 percent in energy efficiency. It also displays the expected annual cost for annual usage of the product. When a person looks at this number on the yellow label, they know how much the appliance will add to their utility bill each month. It takes all the guesswork out of your most mysterious bill.

The Energy Star system is one of the best government programs of the past 30 years. It saves you money while reducing the amount of energy that appliances use.